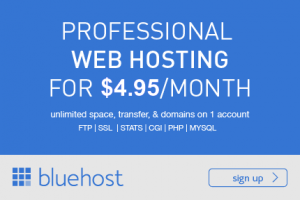 I only recommend what I use!

I can sit in my office for three hours without a visitor, and ten minutes before I have to leave to meet with someone, three people will show up.

My cousin, Emily Michael, went to be with the Lord last Sunday and I had the honor of being involved with the services.  This sermon was written from the standpoint of “What would Emily want?”

I came a across a post for a church’s Director of IT position.  They want someone that knows more than Excel, Ctrl-Alt-Del and “get a Mac.”  Here are my thoughts.  Let me know if you find any churches looking.

You asked for a resume, and I’ll get to part of that later.  Before I do, I ask that you to consider my vision and see if you understand it.  If you do, we’re in business and will be on our way to literally impacting Kingdom growth in an unprecedented way.

I usually take quite a bit of time to explain, but since we don’t have a lot of that, I’ll try to make this short.  Five years ago, I started and incorporated a 501(c)3 non-profit that is now named OpenTech Ministries.  The purpose is to provide free and low cost technology support to churches and other non-profits (schools, libraries, general, etc.).  Right now I work mainly with churches because it facilitates Kingdom growth and they really need it. Lately, I’ve laid awake at night thinking of possibilities.

I work with a lot of proprietary software (Microsoft, etc.), but our forte is focusing on Open Source Software, which you are familiar with in the form of WordPress, Firefox, Thunderbird and perhaps OpenOffice.org.  We teach and advocate programs like these because it’s the best stewardship possible – zero costs and and the ability to freely redistribute to the church office, staff and members alike.  Basically everyone is on the “same page” both legally and, well, freely.

Now, from a technology standpoint, I find there are basically two types of churches.  Smaller budget churches (who need technology just as much as bigger ones in many ways) can’t afford systems like ACS, Blackbaud Raiser’s Edge, MediaShout and Blackboard.  They look for alternatives often in the form of Open Source.  There are some great programs out there, too.  There are also quite a few that just need a little TLC to be totally awesome. I’m going to share three with you real quick, and then the Kingdom impact they could make.

CiviCRM – is a Constituent Relationship Management program designed to manage membership, groups, relational dynamics, contributions, etc…. It is in use by some big organizations (and quite a few churches) and is very similar to Blackbaud Raiser’s Edge (without some of the bells and whistles and no price tag). There has been talk in the community for quite a while on creating a CiviChurch module which would leverage and extend the basics of the program to give much of the functionality of ACS or Shelby Systems.  Info: www.civicrm.org

Moodle – is a Course Management System that has the same (and arguably a few better) features as Blackboard.  Many colleges and universities use it, as well companies, etc.  I know of a mission leader that uses it to train the pastors at churches he has started in other countries much like a homegrown seminary. A large church could use it for discipleship or coordination of other campuses or formal training of other staff/leaders.  Info: www.moodle.org

Lyricue – is used to edit/display song lyrics and passages of text on a second screen/projector for use at live events such as church services, concerts and seminars. It is in use by hundreds of churches and allows for a lot of features that MediaShout and a few others have (CCLI import and statistics, on-the-fly changes, etc). Info: http://www.adebenham.com/lyricue/

How does these apply?  Stop and ask yourself how much a churches, church associations and seminaries often spends on the commercial versions of the above software (hint: tens of thousands for Blackboard and Raiser’s Edge alone). Now, stop and ask yourself how much 100 or 1,000 churches spend aggregately.  The number is staggering – literally hundreds of thousands on any one of them… and that’s in a single year (and small geographic area – ie., there are 1400 SBC churches in Virginia).

What if a church had some real Kingdom vision, though?  What if they decided that part of their contribution was to invest in furthering something like CiviCRM for the benefit of not just themselves… but any church.  “We contribute useable and needed software to any church in the world in order to free resources for other things.”

Think of the advantages… it’s Open Source, so a community would be built that sees a church (or group of churches if they led the way) that is really trying to make a difference by blessing others and expecting nothing in return.  Not to mention, they get to build an Open Source program that is absent the recurring licensing fees that would normally be paid every year.  THAT is what I define as stewardship, because everyone benefits and it frees up resources for many bigger churches and an innumerable number of smaller churches.  (We’re talking millions of dollars in money and man-hours)

Frankly, this type of thinking keeps me up at night because I see the gap between the need and the reality in many smaller churches I work with, and I know what a difference it would make in helping them focus by not being distracted with ADMINistry.

I said I’d get to my resume, and here it is very briefly:

2001-2005 – Contract Chaplain at a Base in Fort Worth, Texas. Also, started OpenTech Ministries (the technology non-profit) by building a computer lab for a small Christian Academy.  Went to seminary, also.

2005-2008 – Navy Chaplain, Active Duty.  Nearly two years at Marine Corps Officer Candidate’s School helping with “Spiritually defining” moments and counseling in all areas.  Presently at Security Battalion as their chaplain (MPs and Brig).
Concurrently, I’ve been the interim pastor at a Church here in Fredericksburg, VA for 2 years.

I know my limitations – I’m not pretending to be an expert at everything.  But I am a strategic thinker and a leader who can think outside of the box and has a tremendous hunger to really impact literally the world by enabling/equipping Kingdom minded churches with technology.

If I read you right… those are the traits you are looking for most.

For the record, I know that our non-profit website www.opentechministries.org is fairly miserable… I’ve been more concerned with helping a few churches lately than marketing.  My other excuse is that I have a full time job in the Navy, I’m an interim pastor, a father of three awesome girls (5,3,1) and husband of a spectacular wife. (BTW, the 3 yr old has some medical concerns that factor into our family’s future, as well).

My hunger is advancing the Kingdom by equipping others.  I’m hoping yours is a similar appetite.

Well, we thought about charging for the “first pictures” but Kari shot it down pretty quick!

Mommy is doing good, considering it was a C-section.Â  Emma is good except that she has Jaundice (Coombs postive) and is on phototherapy.

That’s right, my daughter now sleeps on a lightsaber of sorts.Â  We will hopefully go home Wednesday night by dinner, but keep us in your prayers that everything goes well.

In the mean time, please feel free to stop in. Room 3106, though we are in “Boarding Status” – be sure to keep hands and feet inside the hospital until we come to a complete stop.Â  Basically, we can stay at no charge as long as they don’t need the room.Â  Kari is technically discharged at this time.

Ok, so on to the show!Â  Check out a few pictures. Or copy and paste http://www.kermitjr.com/gallery