Pools are a lovely thing, but my crew and I are a bit particular when it comes to the temperature. At least, most of us (I have a couple that will almost break the ice to get in the water!). Regardless, 78 degrees wasn’t cutting it even though it hot/humid enough to feel like melting. 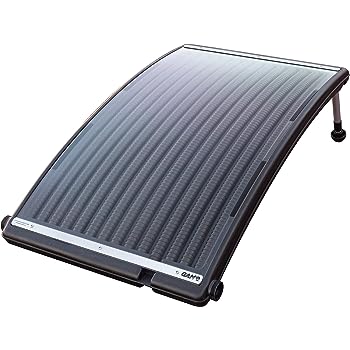 There are tons of options out there, ranging from gas to electric to solar.  We didn’t want an ongoing expense, and most solar are well over $100 for a 2x4ft surface area. Thing is, my other half is a bit more on the frugal side than I am, which I take to be a challenge … can I make it cheaper and better than “the other guy?”

Better is fairly easy. It’s not hard to compete with a whopping 8 square feet of surface area, which is the key to anything solar.  More surface = more Sun = more potential heat to absorb.  But it’s the cheaper aspect that sometimes eludes me. Better for more expensive is always doable, but it’s just not quite the same.  Even better for same price just doesn’t feel as much of an accomplishment.

So back to the dilemma at hand.  My big is is hook-ups. Since we have an above ground Intex, it uses some funky-size threads that don’t simply connect to threaded PVC, etc.  And I don’t have my normal supplies with me at this location.  But it’s okay, I grew up watching MacGyver (you know, the actual decent version with Richard Dean Anderson – I didn’t even know he had a real name until Stargate: SG1).

I started with 500ft of black drip irrigation hose for $45.99.  My original intent was to tie them in using standard garden hose connectors. That’s another $12, but it’s a three-pack, so you’ll have a spare (and technically, it’s $4 each.  The beauty of these particular adapters is the sizing of the external components that fit perfectly with my Intex. Some quick math tells us that this tubing, with a .634in outer diameter immediately offers 26.4 square feet right off the bat ((.634*500*12)/144).  That’s pure hose surface areas (the commercial heater also has gaps between its tubes).  Total win.

However, I was still left with the “How do I tie it into the system?” conundrum.  Now, if I was doing this long term, I’d figure out a PVC connection or perhaps use a Beluga conversion.  The Beluga attached to you output connection and converts it to a garden hose adapter.  That’d be perfect, except that it’s an extra $47 and, for Intex, requires a conversion piece for another $20.  It’s eloquent, but more than doubles my current costs.

But it got me thinking.

Turns out the output shroud on the Intex has a hole big enough to allow the tubing through, but not the garden hose adapter, which fits snuggly inside the inner piece.  Voila! I put it on in the morning and take it off at dusk – I get a few extra hours since the entire pavement heats up and continues to radiate heater.

I’ll likely put it all on a neater looking piece of plywood and cover with clear plastic to keep the wind from turning it into a radiator. It will end up looking something closer to this:

That said, it may get so hot here in the Summer that I have to use it as a radiator at night to cool down the pool! 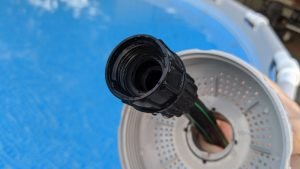 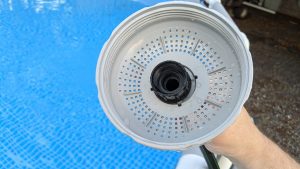 The pump runs a lot in the evening and overnight to filter water. It’s dedicated to solar heater duties during the day. Given its an impeller pump, I’m not too worried about it overheating.

Future upgrades: I have a submersible bilge pump that runs on 12V. I suspect that will be a long term solution given I can put a timer on it and I have a small solar panel that should keep it running with the help of an old battery.

NOTES: Throughput is very low, but it’s enough. Running non-stop continuously pulls heat out of the tubing. Some argue that you should pulse and let the water heat up more – it shouldn’t matter.  You could help by grabbing a few T’s and splitting things up to reduce the length of the tube sections.  Also, no reason to not get another 500ft of tubing! 🙂